In recent years, in male-dominated industries like finance and technology, there’s been a big push to hire and retain more women. On Wall Street, most top banks now have female affinity networks aimed at encouraging women to join the banking industry and to network with each other once they join. Most banks also have significantly changed their recruiting efforts to ensure that they hire more women. And although Wall Street banks have been largely successful at hiring more women at the entry levels (professionals who've taken our Banking Survey in recent years tell us that it's now about 50/50 men to women at the lower levels), they’ve been less successful in retaining women beyond mid-level positions (professionals still tell us that there are few, and sometimes zero, female bankers at the senior levels).

Over in Silicon Valley, while discrimination and harassment suits have piled up, some of the industry’s most prominent women have used their positions to encourage women to “lean in,” while others have fought the law and spoken out against the gender discrimination practices they see all too often. Meanwhile, some prominent tech companies, in attempts to attract and retain more women, have forced their boards to hire more women, and others have put into place quota-like rules when interviewing for entry- and mid-level employees. However, despite all of these efforts, the tech industry still has a long way to go, to say the least, when it comes to gender equality.

Of course, in addition to Wall Street and Silicon Valley, there are other industries that have been historically dominated by male employees. And perhaps the most prominent of these is Hollywood. That is, the film industry. In fact, today, in independent film, 72 percent of key behind-the-scenes roles (cinematographers, editors, directors, etc.) are men.

Which is why the filmmaker Zoe Lister-Jones—the writer, director, producer, and lead actor of the new feature film "Band Aid"—hired an all-female crew for her latest project.

But she knew it would be a challenge to pull together a female production team with enough experience to make “department heads comfortable on a movie of this scale.”

“Which is a total Catch-22,” she adds. “But I wanted to confront that head-on and take risks with some crew members who maybe had less experience, because otherwise, how are these women going to get the experience to begin with?”

“There was a part of me that was interested in subverting a paradigm in order to challenge a system that is really broken,” she continues. “Even though there’s been a lot of dialogue around the underrepresentation of women crews, the numbers aren’t changing. In fact, they’re getting worse. I just felt like since I was in a position to do so, it was kind of my duty to.”

In addition to making a statement on the state of women working in film, hiring an all-female crew turned out to be a great artistic choice for Lister-Jones.

What ensued was the most creatively fulfilling experience of my life. A beautiful trait that so many women seem to share is an inherent anticipation of others' needs. On a film set, this is worth its weight in gold. There was an interdepartmental generosity that I had yet to experience to this degree on previous sets. There was a kindness, a sense of grace and humility, that was effortlessly contagious.

Lister-Jones’ male lead, Adam Pally, also reported having a positive experience working with an all-female crew, while perhaps inadvertently pointing out the limitations of crews with too many men.

“Being vulnerable and whatnot, in front of all those women, it was just easier,” he said. Collaboration also flowed more readily. “Men are sometimes a little bit more bullheaded,” he said of typical sets led by male directors. “If someone comes in and offers an idea, it doesn’t come across as toward the common good, it comes across as against the original idea.”

The sex scenes played differently, too. “No matter how professional the people are, it’s like 99 percent of the time, someone is going to say something wrong, or it’s going to be awkward,” Mr. Pally said of male crews. On “Band Aid,” he said, “when I was the naked one, I definitely didn’t have the same feeling of being judged. It just felt like another one of the scenes.”

Unfortunately, there’s not exactly a happy ending here. At least not yet.

And merely calling attention to the inequities is not enough to correct them, she added. It can even backfire: “You get that checkmark, like, ‘not sure if it’s worth having a mouthy broad on set,’” she said.

Instead of voicing a complaint, “Band Aid” was “doing something about it,” she said — proof that the system can change, but “it needs to be really deliberate. It’s not going to happen by accident.”

Right. And for more change to happen, more deliberate moves will have to happen. On Wall Street, in Silicon Valley, in Hollywood, and in other historically male-dominated industries. 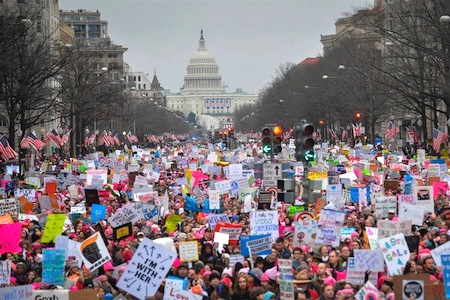 Will the Women's Strike Have Any Effect on Workplace Rights?