“Firm culture is strong; work is interesting and substantive; well thought out mentorship and training; compensation is market.”

“I feel valued. Partners, associates, and staff go out of their way to make everyone feel welcome. I feel like my opinion, whether client-related or firm-related, matters.”

“The hours. It can be a grind at times.”

In 1973, those cats in San Fran approved “MoFo” as Morrison Foerster’s official nickname, accentuating the firm’s unconventional modus operandi. Still, the firm is distinguished by much more than its rebel epithet. MoFo complements its expertise in IP, finance, life sciences, technology, and litigation with a long reach across the Pacific Rim and, more recently, into Europe.

From the Golden Gate to the Great Wall

More than 120 years ago, Alexander Morrison and Thomas V. O’Brien founded the firm that became today’s Morrison Foerster in San Francisco. It wasn’t until the early 1960s that the firm ventured away from Northern California, hopping on for the ride when one of its major San Francisco clients, Crocker National Bank, decided to open an LA office. In the second half of the 1980s, the firm grew swiftly, sprouting offices across the Bay Area, and in 1987, the firm merged with New York firm Parker Auspitz Neesemann & Delehanty. That same year, MoFo became one of the first American law firms to practice in Japan. The firm has also had a presence in China for more than 35 years.

MoFo provides counsel across a variety of practices, including business and finance, IP, international, litigation, regulatory, and tax. The firm is well known for its experience in IP matters and has been among the top 10 Best Firms for Intellectual Property in Vault’s ranking. The firm’s regulatory practice is also highly respected, especially with regard to privacy and data security—in fact, the firm is among the top 5 firms in Vault’s Privacy & Data Security ranking.

MoFo’s pro bono roots run deep to its founder Alexander Morrison, who was a founding member of The Legal Aid Society of San Francisco. The firm has long been a leader in pro bono—it was one of the first law firms to have full-time pro bono counsel and also was a charter signatory to the Law Firm Pro Bono Challenge in the ’90s—an initiative it continues to adhere to today. The firm has been recognized by the National Law Journal’s Pro Bono Hot List multiple times and is among the top 25 firms for pro bono in Vault’s rankings. Pro bono matters at the firm are wide ranging, including everything from reproductive rights and LGBTQ+ rights to voting rights and immigration to literacy and special education—as a small sample. 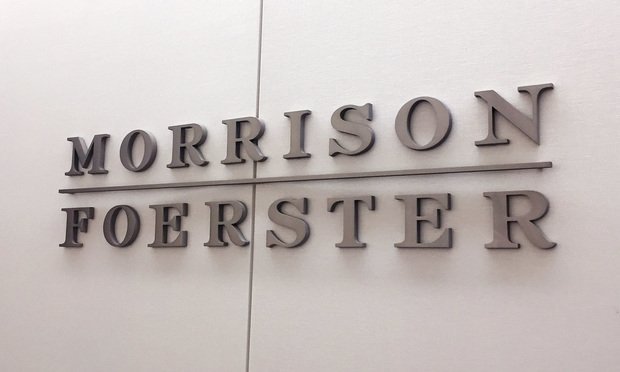 No. of International Offices: 8