“The hours can be long/unpredictable at times, and the technology can be improved.”

“The promotion prospects are slim.”

Skadden is one of the most profitable and well-known law firms in the world. It was the first law firm to report $1 billion in annual revenue, now an industry brass ring. While the firm may be best known for its M&A prowess, it is an all-star across practice areas, boasting an army of about 1,700 lawyers around the globe.

If the Shoe Fits

Skadden was launched in 1948 by trio Marshall Skadden, Les Arps, and John Slate. Unlike many of the white shoe firms, Skadden wasn’t afraid to jump into proxy-fight work during the ’50s and ’60s, which set the stage for the hostile takeovers the firm handled in later years. Much of Skadden’s ethos can be attributed to Joe Flom, who started at Skadden six months after its 1948 founding. Flom participated in most of the major M&A deals of the ’70s and ’80s, establishing Skadden’s hard-nosed style and building a reputation for aggressive strategies. He also spearheaded the firm’s practice diversification efforts—Skadden now boasts top-notch practices in capital markets, tax, white collar defense, appellate and international arbitration, commercial litigation, securities litigation, products liability litigation, restructuring, antitrust, national security, intellectual property, and real estate, among countless others.

Multifaceted as it is, Skadden’s forte is still M&A. Deals such as DuPont-Conoco, U.S. Steel-Marathon Oil, and—most notably—the 1989 takeover of RJR Nabisco launched Skadden into the top rung of American law firms. Skadden also represented Activision Blizzard on its $75 billion acquisition deal by Microsoft, the largest-ever technology deal and largest-ever gaming industry deal. It’s not surprising that Skadden became the first law firm to handle over $1 trillion in globally-announced M&A deals in a single year (2015). The firm is a mainstay atop Vault’s M&A ranking (consistently snagging the No. 2 spot) and is regularly ranked in the top tier for M&A by Chambers USA, Chambers Global, U.S. News–Best Lawyers, and The Legal 500.

Don’t be deceived by Skadden’s M&A foundation—the firm’s litigators are first rate. The firm has been named a finalist for General Litigation in the New York Law Journal’s Litigation Department of the Year. It has also held the top spot in Vault’s Securities Litigation ranking since 2011 and was named Law Firm of the Year for Mergers and Acquisitions Litigation and Securities Litigation in 2020 by U.S. News — Best Lawyers. The firm was also named among BTI Consulting Group’s 2020 Fearsome Foursome—going up against Skadden litigators isn’t for the faint of heart.

Pro bono isn’t merely an afterthought at Skadden. In 2021, Skadden attorneys in the U.S. averaged 122 hours of pro bono work. Attorneys and professional staff at the firm have completed more than 2 million pro bono hours in the past 10 years, with 180,000 pro bono hours in 2021. All pro bono hours count toward the firm’s 1,800 billable hour target, which associates must meet to receive a bonus. According to the firm, Skadden utilizes a practice area model to drive efficiencies in its delivery of immigration-related pro bono legal services; as a result of the program’s success, plans are underway to launch other pro bono projects following this model. The firm also offers public interest externship programs with the Legal Aid Society of New York; Legal Aid Society of Washington, DC; and Lawyers Alliance for New York. In addition, Skadden is a member and was instrumental in the formation of the Law Firm Antiracism Alliance.

Skadden will offer students the option to interview virtually and/or in-person.

In Summer 2021, our program was mostly administered virtually. Many offices offered summer associates the option of working in the office and/or participating in social events in or around the office. As in 2020, the remote component enabled us to offer a more intensive learning experience firmwide. Elements of our incoming associate training program were presented by Skadden attorneys to teach fundamental skills of successful Skadden lawyers. Summer associates worked on client assignments and pro bono matters, including those focused on COVID-relief initiatives and the fight against systemic racism. Relationships with attorneys were fostered through virtual and in-person events—Mentor Mondays, Wellness Wednesdays, demonstrations, affinity group events, viewing parties and “Skadclass” courses taught by Skadden attorneys on a wide array of passions and hobbies. 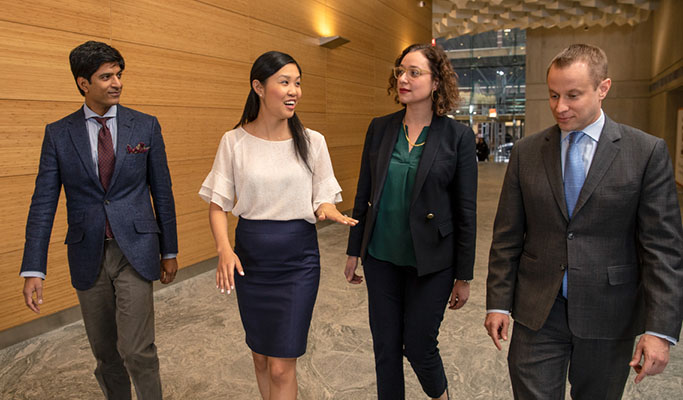 No. of International Offices: 13